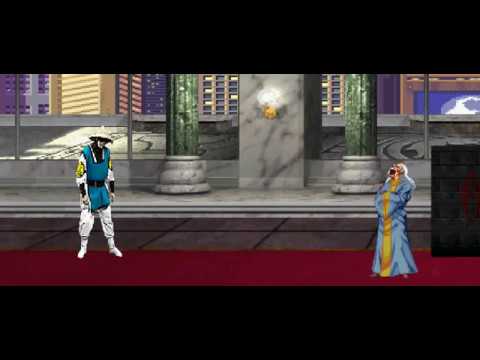 A flash movie by smoothuser
Credits to: smoothuser, MK, everybody, M.U.G.E.N., etc.

DISCLAIMER: FOR ENTERTAINMENT PURPOSES ONLY. ALL PROPERTIES ARE CREDITED TO THE RESPECTED COMPANIES AND USERS.

Story: THE BEGINNING- Bison’s end came at the hands of Ryu two years ago. The super charged dictator met his end with a powerful Dark Hadou Shoryukken. This collision of powers created a tear of realities, yet no one is quite sure what came out or went in. The end of the Shadoloo soon followed. Since that day, Bison’s essence spread across the earth gradually seeping into the bodies of its inhabitants. This evil power lies dormant in it’s host and is activated when it encounters a host with a greater amount of psycho power within them. It is said that this twist of fate created a new kind of psycho drive which has yet to be located and activated.
GEESE AND RUGAL- With the aid of Shang Tsung, Geese and Rugal have been capturing humans tainted with abnormally high amounts of psycho power for his upcoming tournament. Rugal hopes for one of these fighters to have enough pyscho power to attract the new virgin psycho drive. Shang Tsung informs Rugal that the vortex was a portal to outworld and more psycho essence could be there.
JAGO- Two months after the battle with Scorpion, Jago has had little progress finding Rugal, the Lin Kuei, or his sister Orchid. He is forced to return to his roots at the Wu Shi Academy and ask the elders that banished him for assistance. Jago has continued his training and displays some of his new techniques to his old rival Kung Lao.

AUTHOR’S NOTE:
Thanks for reading to this point. First off, you’ll notice this movie flows at a different pace. Part 1 was just a spur of the moment creative construct. Part 2 fleshes out more of the intended storyline and informs you about what the characters are gunning for…hence the subtitle AMBITION. TECHNICALLY, you could say this is part 1, but let’s keep it simple. There was a lot more I wanted to add, but that 16000 frame limit came really fast. It still came to a pretty decent ending. Rest assured, in part 3, everyone will be going where I intend for them to go and do what I intend them to be doing. Coincidentally, this is the second flash i’ve constructed where the music kinda fell in place with no editing from me. I did have to edit one tiny part, but all the rest just panned out nice. Although, I still haven’t mastered the whole button thing, the text still displays at a readable pace. Just don’t get lazy while you’re reading. I hope you enjoy this second installment. Comments/Critiques are strongly encouraged. Enjoy. RUNTIME: 15:53 (until end of closing song)