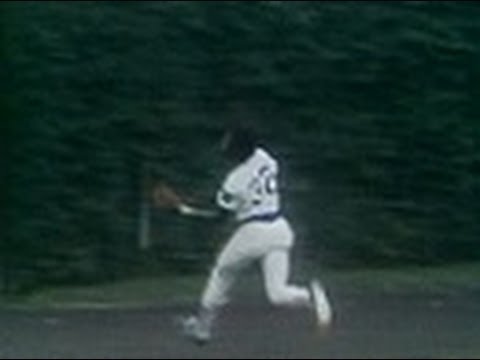 Bob introduces a report by John Campbell of WBAY Channel 2 in Green Bay, WI, about a Green Bay man named Mark Ernst who has made cross-country skiing a year-round endeavor by the use of roller skis. Film of Ernst roller skiing on the road is shown, with some comments by him about his invention.

Bob then introduces Bruce Roberts, who reports on the following sports of the day:

– Chicago baseball scores, with the Sox beating the Twins at Minnesota 8-5 in the first game of a doubleheader, but losing 6-5 in the nightcap as of the 7th inning (Minnesota won the second game, 9-5), and the Philadelphia Phillies defeating the Cubs at Wrigley Field 6-5; highlights of that game (courtesy WGN Channel 9 – of course) are shown

– More baseball scores, from the American League (including the New York Yankees sweeping a doubleheader in Detroit against the Tigers, and the Red Sox/Orioles matchup in Baltimore rained out)

– Highlights of the previous day’s matches at Wimbledon (courtesy NBC Sports), including Ilie Nastase defeating Tom Gullikson 6-4, 6-3, 1-6 and 6-3 to advance to the fourth round along with Jimmy Connors and Bjorn Borg

– In golf, final round play in Western Open at Butler National rained out; footage of a groundskeeper fishing behind the 11th hole, and Chi Chi Rodriguez conducting a clinic on how to hit a soft shot over a trap; Bruce notes CBS will begin coverage at 3:30pm the next day

Bob says good night and advising he and Bruce will return at 10pm; he identifies himself as “for Harry Porterfield,” after all this time. 😉

Commercial: Low Calorie Sugar Twin – Only 1 1/2 calories per teaspoon – “So Much Like Sugar, It Could Fool You”

Long shot of newsroom, with Bob speaking with Irene Rodriguez – notice at the right of the screen the Thomson-CSF TTV-1518 camera with Q-TV VPS-100 videoprompter system – with super text: “Portions of this broadcast were recorded”

About The Museum of Classic Chicago Television:

The Museum of Classic Chicago Television’s primary mission is the preservation and display of off-air, early home videotape recordings (70s and early 80s, primarily) recorded off of any and all Chicago TV channels; footage which would likely be lost if not sought out and preserved digitally. Even though (mostly) short clips are displayed here, we preserve the entire broadcasts in our archives – the complete programs with breaks (or however much is present on the tape), for historical purposes. For information on how to help in our mission, to donate or lend tapes to be converted to DVD, and to view more of the 4,000+ (and counting) video clips available for viewing in our online archive, please visit us at: